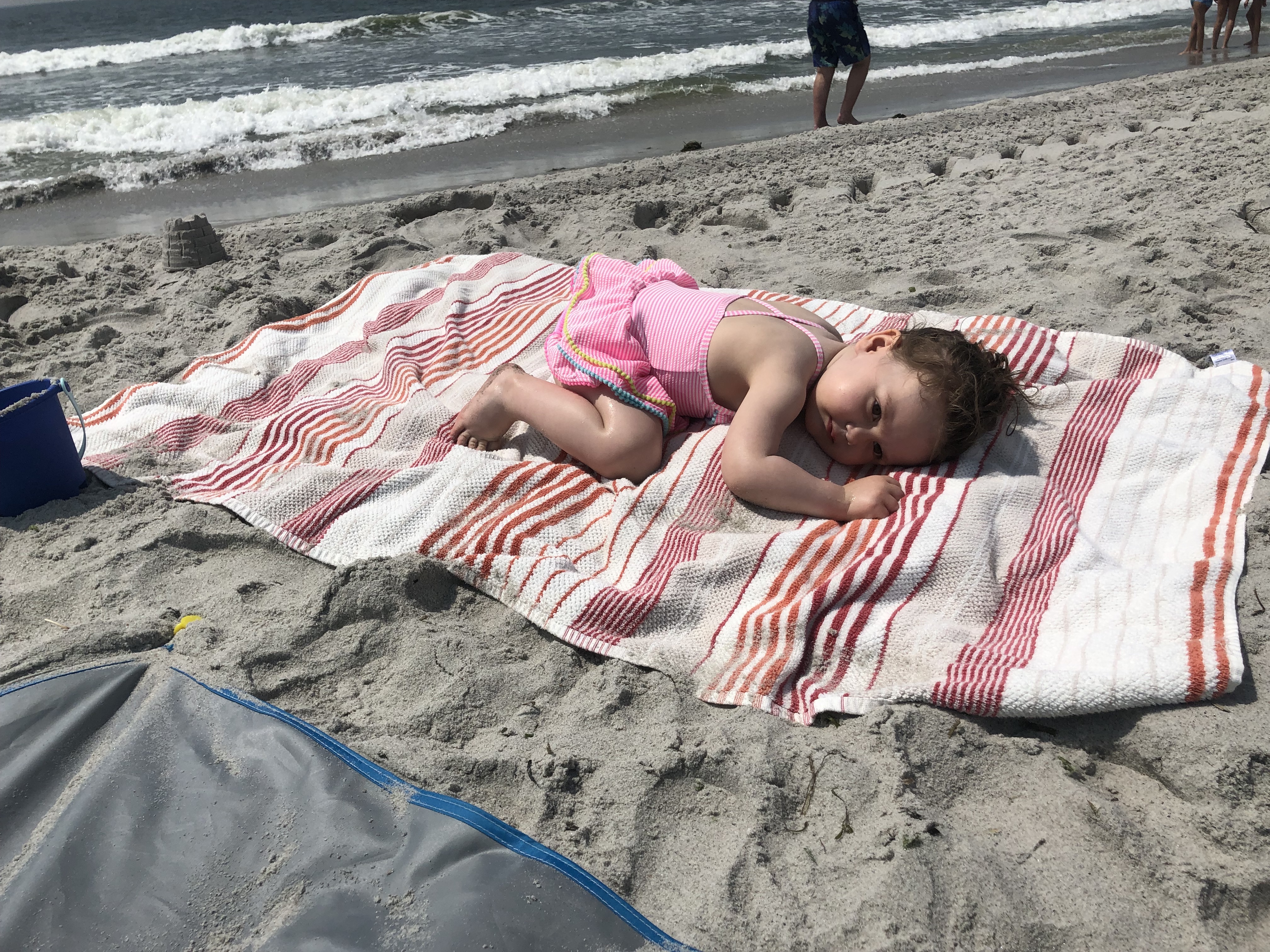 This first week, post-Labor Day, has me reflecting on our whole summer. We didn’t plan anything too crazy since we welcomed our second child in May, and, instead, used the summer months to get into a routine and acclimated to being a family of four. We did manage to sneak away for day trips and little weekends, here and there, and as with most things we try to do with children, the events were surrounded by a lot of hilarity, drama, and exhaustion! One day that stands out was our quick trip to the beach!

The great parenting mantra is “This too shall pass.” Well, that was helpful for about a minute until I realized that yeah, everything passes, but only to lead to the next parenting hurdle or catastrophe all too quickly. Instead, I’ve embraced the other cute little IG saying that is all too accurate: “Motherhood is 50% thinking your head might explode and 50% thinking your heart might.” 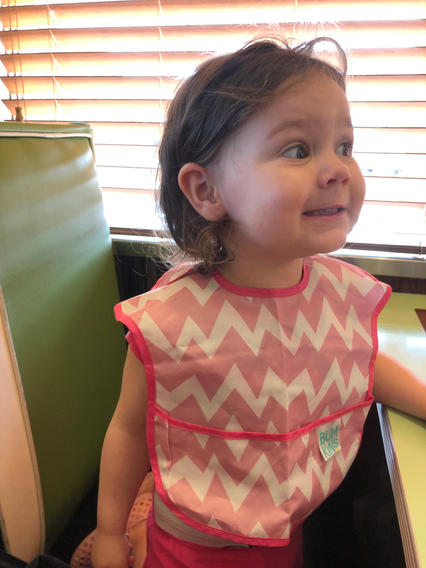 Our first beach trip of the summer was a perfect example of this. My husband took a vacation day and we rented a car for a quiet Tuesday day trip out to Long Beach, NY.  Everything was in place. From the big—oversized LLBean sun shelter, check, beach chairs, check, cooler with endless provisions, check—to the small/borderline ridiculous—emergency saline in case one of the kids got sand in their eye, check, a solar panel iPhone charger, check—I was ready for whatever Long Beach could throw at me.

Well, it turns out that traveling with 15 bags, a precocious two-year old, a floppy 8-week old, and two very tired parents means somewhere something gets neglected. In this case it was our Zipcar. We were so concerned with shuffling children around and out of traffic and shielding newborn skin from the sun, that we forgot to notice poor little Zippy’s hazard lights were switched on. Probably from the toddler that declared “I’m driving home” while playing with the steering wheel as us ‘rents tried to figure out how we could strap 7 bags onto each of our bodies and then the children. 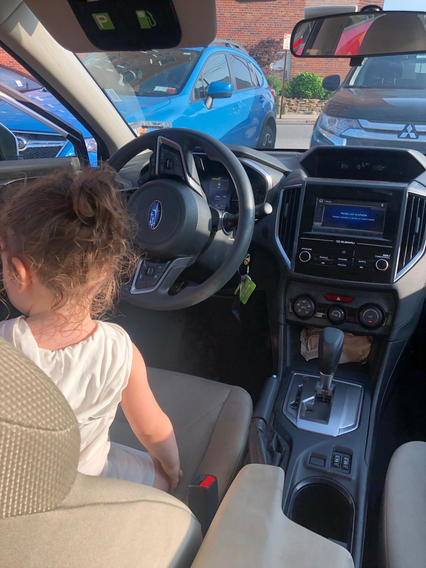 So, after a pretty easy day at the beach (especially easy because the newborn can’t move and the oldest is apparently afraid of the ocean, and the sand was too hot for her to walk on that she, for once, couldn’t run away from us), full of magical moments and hilarious toddler observations, we headed to a car that wouldn’t start.

My first instinct was to start flagging down strangers. It was 2:00PM, we could get home by 3:30PM, unpack and shower before dinner, and have an early bedtime. It was all too perfect and I wasn’t going to let a dead battery ruin these parenting dreams. Except, after 100 tries, I discovered no one carries jumper cables anymore. No. One.  Surely I am not the only person this year to have a dead battery. What do people do? I have always carried cables in my car!

After, I gave up on flagging down any car that passed, I stuck to large construction vehicles, vans, and luckily landed on a tow truck with cables! (Once my damsel-in-distress-with-a-baby-attached-to-her flagging worked, I gave my husband the reigns to actually talk to the driver.)  While my husband was getting frustrated with the tow truck driver’s cables that wouldn’t work, I was confronted with a toddler screaming she had to go “softy” (poop). Perfect timing. 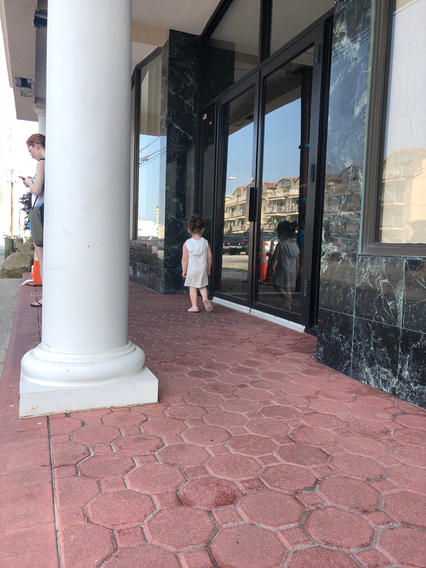 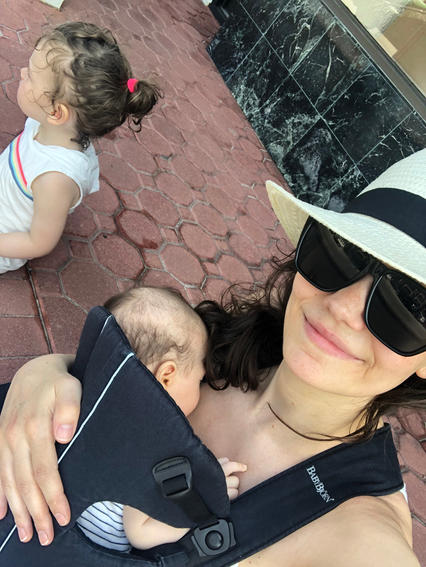 The stoop we were loitering on was in front of a big apartment complex. I desperately banged on the windows and doors while my daughter’s sudden urge became emergent. A maintenance worker luckily walked by, let us in, and led us through a sketchy women’s locker room within the complex.  My daughter, barefoot because all her shoes were too sandy for to endure at that moment, managed to make it to the bathroom, but not the two extra feet to the toilet. I used what little post-pregnancy quad muscles I had left to hold the new baby that barely fit in the Bjorn that was strapped to me, while trying to clean out the poop from her undies, encourage her to go more, and wash us all up. We fought for a minute about the importance of hand-dryers, but she ultimately refused after deeming them still too scary (not realizing that the actual scary situation was the fact we were in the back of some locked building that my husband didn’t notice us slip into).

We made it out of the bathroom while I longed even more for that shower/clean-up time at home, and discovered that the tow truck had gone since the jumper cables wouldn’t work. My husband (thankful to know where we were after we disappeared for a cool twenty minutes) was now on hold with Zipcar. This was also the exact moment my daughter started taking around her first imaginary friend that she named Baby Margaret, after Daniel Tiger’s sister. (She either named her after the show or wants her to actually be Margaret from the show, but, instead, a version the size of a nickel.)  So, while my husband got through to customer service, my heart was busy bursting because my daughter was being so darn adorable, especially when she kept pulling this little, fake friend out from her pocket (HER POCKET!), but, at the same time, I was also on the verge of losing it, trying to micromanage my husband’s Zipcar conversation, especially after we got less-than-desirable, roadside assistance wait times…

Zipcar should have been with us by 5:00PM at this point, and our snack stock was losing its appeal. Probably due to my toddler forcing us to toss a bunch after filling the Annie’s Bunnies box with broken bits of pavement and seashells. After placing another call to Zipcar, once 5:00 had passed, we learned that there was no record of our initial service call, and we were left waiting for customer service to get back to us once again. While my husband waited for a return call, I hoofed the kids back to the Laurel Diner. It had been our breakfast spot earlier in the day, so I knew it was clean and kid-friendly, but, boy, carrying a baby, corralling a toddler, and fielding them both alone in the restaurant, felt a heck of a lot different than the joy of our first stop in Long Beach that morning. That morning we were a family of four, excited to feel the warmth of the sun and to dip our toes in the sea, after filling our bellies with bacon, eggs, muffins, and coffee. Now, I just longed for the kind of water that comes from a shower head and goes well with soap, and to slide my legs under the covers of my bed. 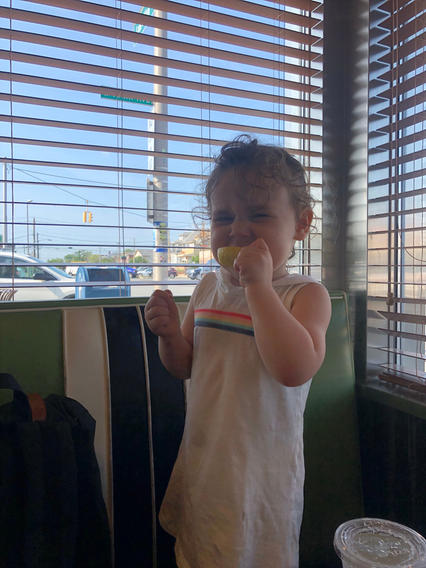 My husband met us in the diner in time to finish the quesadilla my daughter and I had already picked over, and informed us that a new request had been placed for roadside assistance, with a shiny, new, hour-long wait time. Welp, maybe we would get dessert too.

Untrusting of Zipcar’s promises, I called to speak to management to get some guarantees. As I was on hold, I noticed my child (who was being a trooper, but still tired after missing her nap for our special day) was extremely sticky with a dress stained in the colors of the rainbow, and had begun coloring on her cheeks with crayons. Pushing pretty hard to get those dark strokes. Zipcar confirmed my fears–no service call was on record. AGAIN. I lost it as much as I could in front of my children. We had now been loitering on the sidewalks and diners of Long Beach, New York, for WAY. TOO. LONG. We should have been home, clean, reading books before bed at this point. Finally, everything was escalated, they put us in direct contact with the local garage, and someone would be with us within a half hour.

It was almost 7:00PM when the driver arrived and sent us on our way. All we needed was a jump! And, the most frustrating bit, that first tow truck we flagged down would have sent us on our way! The only reason that jump did not work was that my husband needed to swipe the Zipcard over the sensor on the windshield before trying to start it. Something very simple, but bespoke to Zipcar’s annoying remote key system, and not included in the glove box information, so we had no way of knowing. We got the kids into the house just before 9:00PM. I forced my toddler into the shower with me (we were both too disgusting to skip this step) while my husband returned the car, and we all went down for a deep slumber 2+ hours past a two-year-old (especially one that had no nap’s) bedtime.

So, the moral of all this? You can’t expect any day to go exactly as planned. And it was my ideal scenario until we got to the parking lot to head out that afternoon. A day can crumble at any point. But, that’s the way life is. I pointed out all the little ways this adventure started to unravel, but what I have yet to point out, the most important piece, is that my daughter had no idea. She had no idea that we had not planned to go to the Laurel Diner for the second time that day. That we were hanging on the sidewalk because we were stranded, not because it was so much fun to play with our new imaginary friend and collect rocks. She was happy. She was happy playing on the stoop, talking to the tow truck driver, riding on Daddy’s shoulders back from the diner, coloring all over her face. Maybe even more so than at the actual beach with the hot sand and scary waves! She is my reason for realizing that life’s stressful moments do not have to be stressful at all. Just different. Let your kids change your perspective and find the good everywhere. Happy Friday! 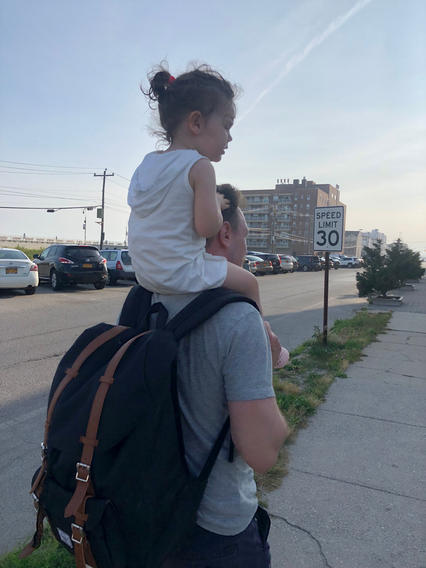 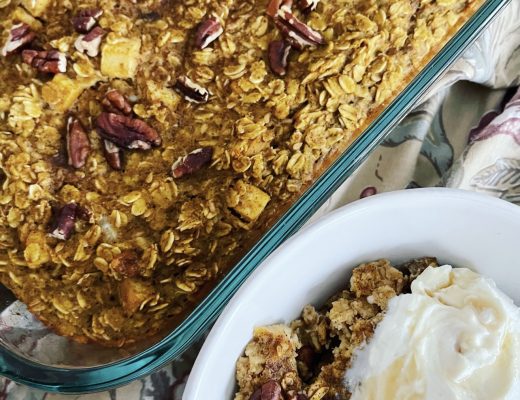 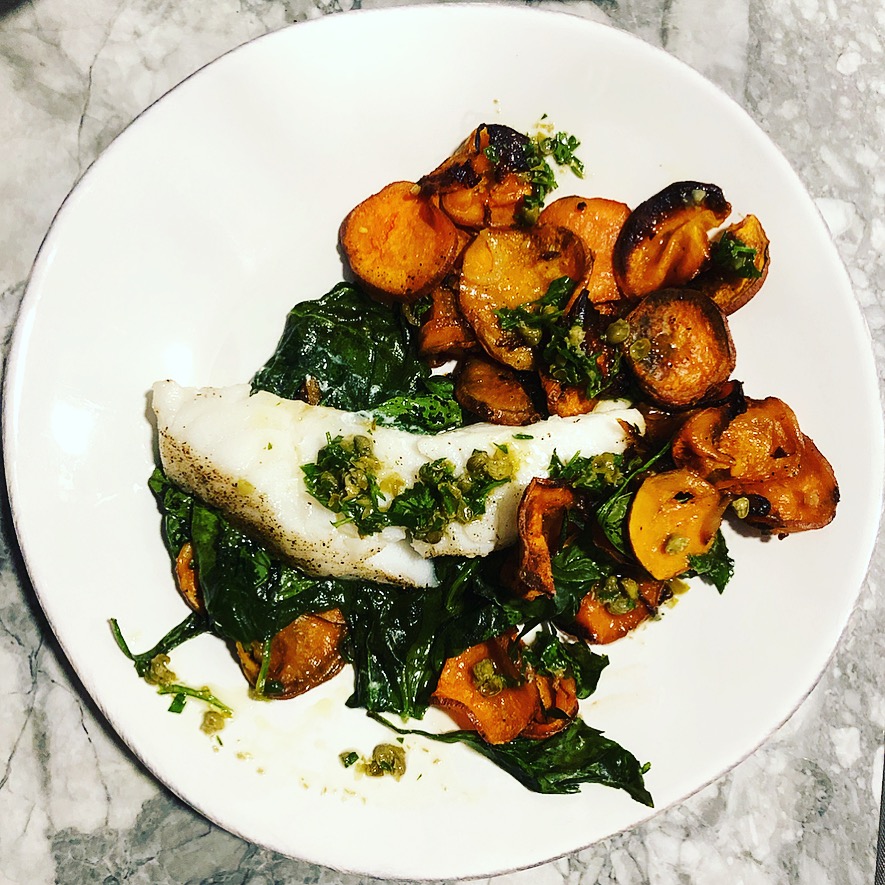 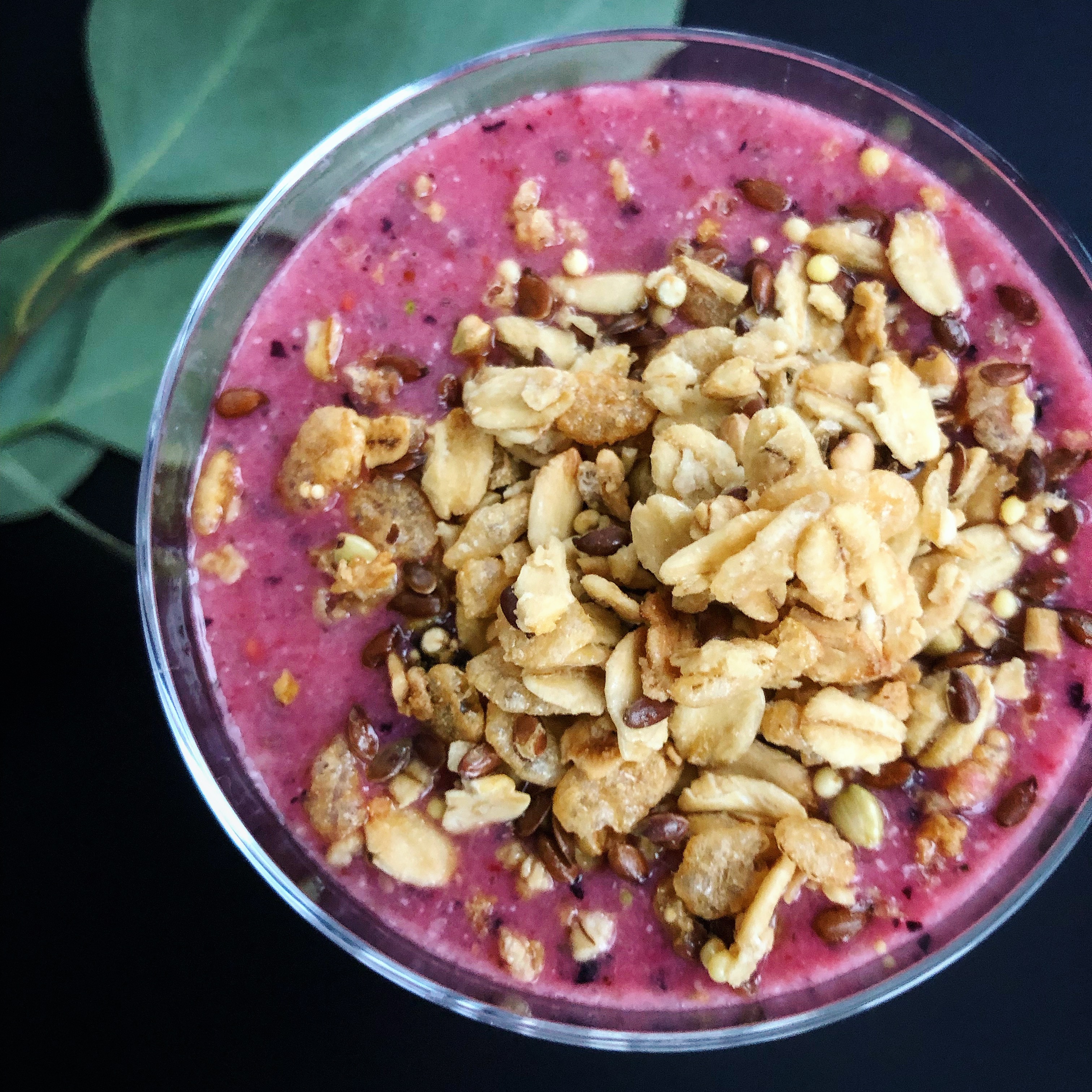 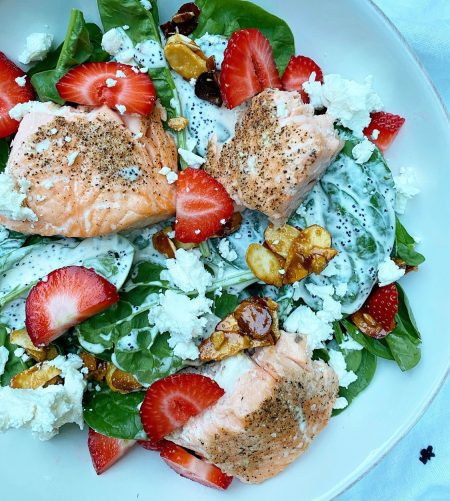 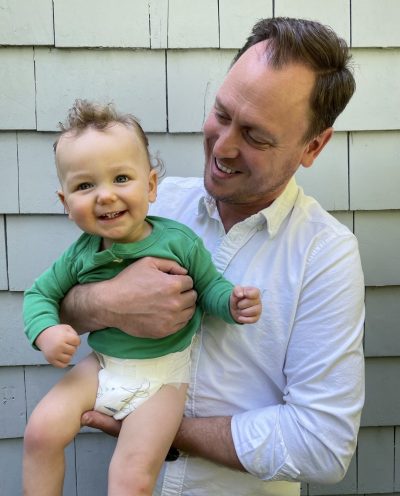